In the Low Countries, 2: Language, art and history

What intrigued me most about the Low Countries were their languages and art, keys to understanding their complex cultures and their roles, passive and active, in clashes that have transformed the world. The decades of wars in the 16th-18th centuries involving Spain, France and Austria, each with their local Nederlander allies, the defeat of Napoleon at Waterloo in 1815, the German invasions of  1914 and 1940, were among those clashes.  These farmers, traders and seamen on the marshlands of the western edge of Europe, with few natural resources and on lands that had constantly to be defended from the sea, were among the first to establish industries and trading companies of global reach, challenging the empires of Spain, Austria and Britain and carrying the vices and virtues of their culture to their colonies in America, Africa and Asia.

I have always thought of language as a key to psychology, and that understanding the history of Nederlands ( “Dutch”) and the French-related dialects known collectively as Wallon (or “Walloon”) would help us understand how their speakers understood the world and what they thought they were fighting about when, as happened for very long periods, they sought to murder each other.

Except for certain peculiar expressions still heard in Belgium, Walloon has mostly been absorbed by more standard French, which I already read and speak more or less adequately. Dutch and its Flemish variant, however, were new to me and required greater effort for reading a menu or a commemorative plaque. Given the resemblance of many words to English or German, and with frequent reference to my English-Dutch dictionary, I could usually make everything out, with time. The harder part was the pronunciation. The “ui” in huis (house) or uit (out) and the “ij” in many words, including the egg and bacon sandwich called uitsmijter, and the guttural “g” (harsher in The Netherlands than in Belgium), have been a challenge. Fortunately I found a free Internet course to hear the sounds, and could ask for coaching from Dutch friends — who found my efforts amusing, since they like many Dutch and Belgians have managed to master English without noticeable foreign accent.

Even more than language, and more clearly, art implies the concerns, fears and aspirations of  its creators and consumers. Especially the paintings, which for the era before photography and other mechanical reproduction are practically our only evidence of habits and costumes of the time. 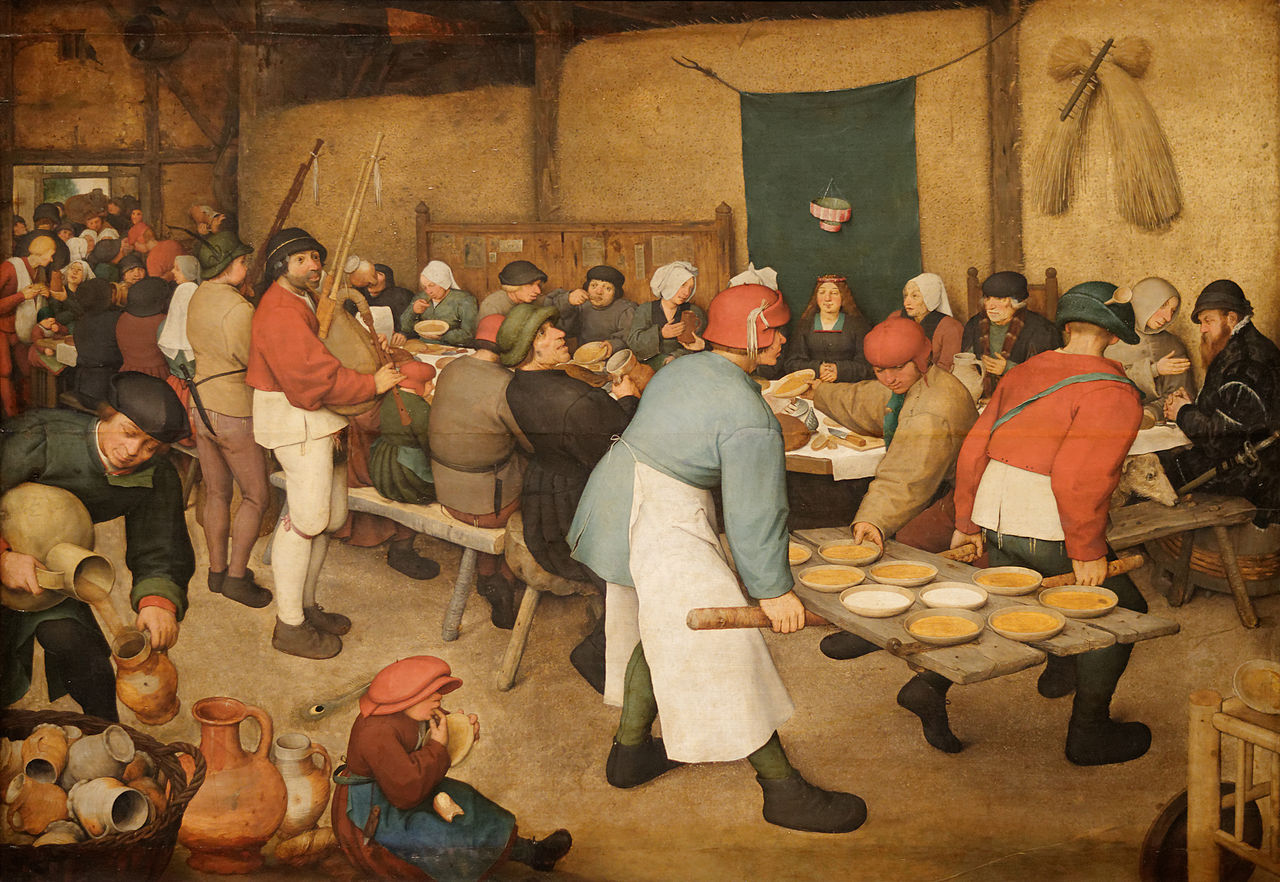 Thus the  show at Brussels’ Koninklijke Musea voor Schone Kunsten van België (try pronouncing all that)  “Bruegel: Unseen Masterpieces”, produced in collaboration with Google and half-a dozen other museum collections, was of enormous anthropological as well as esthetic value. Sculpture, architecture and the design of surviving furnishing, clothing, tools and household objects give us further clues.

Our two-week visit to Belgium and The Netherlands has hardly satisfied my curiosity, but it has helped me pose my questions more sharply. Above, and in notes to follow, is some of what I think I’ve learned so far.

I intend to say more about the art we saw in the two countries, including Memling, Rubens,  Renoir and Vermeer among the old masters, Magritte and the De Stijl group in The Netherlands in the 20th century, and the whole glorious tradition of bandes dessinées. But for now, just in case anyone is interested (probably not, but maybe someone is), I return to the language.

For your pronunciation practice

I checked Wikipedia for this detailed history of Dutch language (Nederlands) and its relations to German and English. In brief : Many centuries ago, back when these regions lay just beyond the control of the Western Roman Empire, the peoples from Scandinavia and Germany to Belgium and the Netherlands are believed to have spoken mutually intelligible dialects. Or maybe not; maybe they just sounded all the same to the Romans who reported on their contacts after they ran into or fought against them. Anyway, how does anybody know? Mostly by induction, working backward from later, recorded speech to find common patterns that suggest an original, ur-version. Fortunately, by the 4th or 5th century A.D., some of those barbarians (as the Romans regarded them) had been sufficiently impressed by their Roman neighbors to either adopt Roman script or invent their own — see Bergakker inscription for an example of Runic— leaving evidence as words and phrases.

By that time, the speech habits of the lowland  tribes near the Atlantic coast were diverging notably from the “High German” of the hillier lands further inland. So that today, Dutch and Flemish are quite different, and grammatically less complicated, than the German of central and southern Germany, Austria, Liechtenstein, Switzerland, and Luxembourg.  Certain changes that occurred in “High German” never occurred in “Low German” — or in English, either, so in some respects Dutch is closer to English than to modern German.

That’s enough for now. As we say in Dutch and Flemish, Tot ziens.